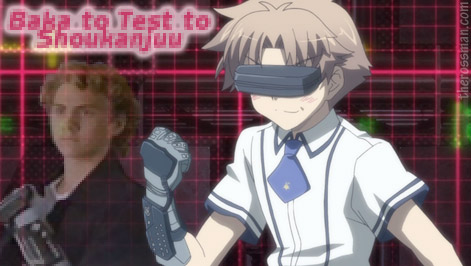 I must admit, Baka to Test to Shoukanjuu (or Baka and Test: Summon the Beasts) had me scared when I first heard about it. Not "scared" as in "Ooooooo! Creepy! Frightening! I peed my pants a little!" but "scared" as in "Jesus titty-fucking Christ! Really?! Do we NEED another one of these shows?" The person who originally described it to me told me "it's about this special high school where teh students learn to summon powerful creatures to fight for them, against each other, in between going to class and doing other magical high school stuff." That retard was way off, and I'm glad I was able to overlook that shitty summary (which is far from a close description of the anime series in question) and give it a shot. Now I will tell you why.

Baka and Test is about a special Japanese high school — but the students that we follow aren't very special themselves — and the whole thing is FAR from yet another Harry Potter, or Zero no Louise rip-off — which is what I was expecting. It takes place in modern Tokyo, and the school (one Fumizuki Academy) whose students we follow, is a state-of-the-art facility that's trying out a new system of categorizing its students into a caste system of classes: the "A" through "F" ranking system.

The A classers are the smartest and most focused kids in the school. As a reward for their dedication they get the most luxurious classroom (with La-Z-Boy chairs and sofas to sit in), a fully stocked coffee bar, non-stop snacks, and the love and adoration of the teachers. As the ranks get lower (from "B" to "C" to "D" to "E" to the lowest of the low, the F-ers) the classroom facilities get worse and worse, to the point that the F class has to sit on flat cushions and study on old orange boxes in a dirty, run-down classroom that the school never bothered to renovate.

There is a battle system set up in the school though, and it allows any student to challenge any other student, or any full class to challenge any full class, to a fight that entails their chibi hologram avatar representations of themselves beating the snot out of their opponent(s)' (using their most recent test scores as their strength meter and hit points). If one lower-ranking class challenges and defeats a higher caste class, then not only do they get bragging rights over the pussies, but they get to take over their classrooms, and the losing class can't issue a rematch for at least 3 months.

"That sounds stoopid!" you slobber, while taking a break from looking up man-on-pig beastiality pr0n to criticize my review. "How is any of that shit entertaining in the least?!" Well, my first answer is "At least it's more entertaining than your mother after I fucked her raw, shoved that curling iron up her twat while it was on high heat, and took a shit in her mouth last Friday," but my more accurate reason is "it's funny as hell because of the great characters that fill each of the ranked classes, the way they all treat and interact with each other, strategerize their way around major disadvantages in test scores during their class battles, and how certain male and female characters interact with their crushes/stalker victims." Baka and Test is one really funny show.

Yes, I'll be the first to admit that maybe 1/4th of all its jokes fall flat (or think they're much funnier than we, the audience thinks they are), but that's still a much better percentage than the typical comedy anime series we've seen lately (no names — you know which supposedly funny series I find to be as painful as a prostate exam given by Edward Scissorhands). But the jokes that DO work are often downright hilarious. Yeah, I know that explaining visual jokes doesn't usually translate well into the written word, but just as a small example of what I'm talking about, here's how one episode opens:

Yuuji (one of the main characters, and the handsomest boy in F Class) is gently woken in his room one bright morning by a beautiful and demure girl sitting on his bed, who offers to either feed him a delicious breakfast she made him, give him a massage, or allow him the time to fall back asleep for a little while longer. Without missing a beat, he smiles his handsome smile at her and says that all he needs is his cell phone. Then in a grave and serious voice he calls the police to report a stalker who broke into his house.

See, I probably just ruined that whole joke, but my god, the timing of it, the deliveries of the lines, and the imagery were all perfect. And despite the bizarre set-up of the whole battle system of the school, the show doesn't always focus on that stuff. As a matter of fact most of the show is just based around Akihisa Yoshii (the main protagonist, and most baka of the baka in the entire school) and his strange life, fucked up friends (like the guy who's so cute everybody thinks is and treats like a girl, and the creepy kid with the camera that they all just know as "Voyeur" [or "Morose Pervert"]), and strange love triangle between him and the only two (real) girls in the class. Once it gets rolling, the situations that pop up are sometimes so bizarre and go in such interesting directions that you just find yourself enjoying the fuck out of the ride and not questioning the strangeness of it all.

So, what did I think of Baka and Test: Summon the Beasts? In the end I find that I have to give it a solid "B". It wasn't the greatest thing ever, but it was pretty hilarious most of the time, and I found myself laughing so hard on occasion that I had to rewind and rewatch many scenes to see what I missed. That is pretty high praise I suppose. Maybe I should give it a "B+"? Or maybe, in honor of F Class, I should give it an "F". No, that'd just be confusing for you retards out there who just skip to the bottom of my reviews for my final word. Though it would serve you right! Go on, read this whole review from the start, loser! It's good for you!

Hmmm, though maybe if we could alter our holographic avatars... Like say make mine a full-sized, hot Asian chick! And if I could make myself get terrible grades so that I would become the worst-ranked kid in the class, and then the teachers would make me their bitch-boy (like that Akihisa guy in the show), and allow my hologram to be corporeal, so that I could do menial physical labor with her! Then holy shit.... I would sign up for that school in a goddamn heartbeat! I don't think I'd ever leave the school grounds, I'd just keep my Yoko-san with me all the time... Studying biology and chemistry if you know what I mean. Oh yeah, you knowwhatImean! Booyah!

Not a bad show. Goofy and a bit crazy, but I still laughed a bit at it. So there.

I don't get it. Yeah, they're allowed to have fights and shit in this school — which is cool — but they have to fight with retarded-looking, tiny and "cute" versions of themselves?! What the funk!? Why not start up a REAL school for REAL boys and girls and let them settle their problems with REAL face kicks and cunt punches! Make some MEN out of our kids. Seriously, this namby pamby shit has got to stop. We need to go cold turkey with our youth, throw them into the arena called life, and let only the smartest and toughest survive. Let's bring Darwinism back to humanity! Let's stop coddling the pitiful and lame! MORTAL KOMBAAAAAAAAAAAAAT!

This show should have been SO much more. Instead it just pussed out and got baby poopy all over itself. Meh, it wasn't horrible, but it was far from violently awesome. I give it 2 out of 4 somethings.