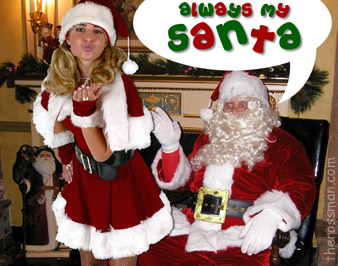 Ho.... Ho.... Hooooooo. Mai is one major Christmas ho. Now that that cheap joke is taken care of, let me tell you all about her 2-part OVA series Always My Santa -- I am just gifted with great segues, huh.

Ken Akamatsu's (you might remember him from such fanboy, hard-on favorites as Love Hina and Negima) Always My Santa is a strange little holiday special. The first episode is basically a mix of A Charlie Brown Christmas and Video Girl Ai... God bless those horny Japanese! The second episode though is more your typical loser-love-fest as it's a mix of pretty much every harem show ever made and Video Girl Ai. How the hell do they do it? Quite honestly I am very much impressed with them Japanese the way that they always pull this stuff off (mixing kinkiness with comedy, emotion, drama or action). And yes, they kind of pull it off here with Always My Santa -- not that it's the greatest Christmas story since A Christmas Story or Home Alone (fuck off! I love the original Home Alone), but it's fun, and it does get you into the holiday spirit. And lest we forget, cute girls in tight and revealing Santa outfits are the reason for the season. Jesus died for us so that we could see this kind of thing around his birthday. Trust me, why else would he get whipped and nailed to a tree unless he knew that it would lead to hot, horny honeys in skimpy costumes 2000 years after he died? He has our eternal gratitude.

Anyway, Always My Santa goes a little something like this: There once was a lonely teenage boy who was born on December 24th, and whose parents named him Santa (even in un-Christian Japan that's a dicky thing to do to your offspring). Pretty much every Christmas he's ever had has been spent alone (with his parents always being away) and depressed. He grows up to hate everything about Christmas and all things Santa.

Well, one Christmas Eve Santa (the boy) gets propositioned by a cute, young girl who claims to be a Santa in the making, and who says she can sense his unhappiness and thusly wants to cure it. This girl, Mai, then tries to make Santa (the boy) appreciate the joy all around him by granting his every wish... as long as the answers to his wishes begins with a word that starts with "san" (like sandwiches, sanmon [how the Japanese retardedly pronounce "salmon"], sanbo attacks, and sanpuru [a changing room where Mai can change into various titillating outfits -- truly the best gift she tries to give him]... obviously they were stretching for a joke by the end here), but each silly, goofy, kooky use of magic tends to make Santa (the boy) even less likely to accept any merriment in his depressed and anti-Jesus life. But just when all hope seems to be lost, *GASP!* Santa (the boy) finds the true meaning of Christmas, Mai transforms into a busty, blonde and sexy Kris Kringle (fueled by Santa's [the boy] newly found Christmas spirit, or somesuch deus ex machina explanation), and her little stuffed reindeer toy turns into a full-sized, giant, flying, magical beast worthy of being one of old Saint Nick's very own... Only Mai's reindeer's name is "Pedro." Awesome.

That pretty much wraps up the first episode (come on, if that really spoiled anything for you then you've never ever seen a Christmas special in your pathetic waste of an existence), and the second chapter begins several months after Christmas (and the after-credits ending). We find Mai and Santa at the beach where they soon bump into Mai's pink-haired, midget, younger sister, Mai-Mai, and Mai's best friend/rival Santa, Gorgeous Shirley. Then things get even more bizarre, bouncy, bedlamy and bubbly (a Ken Akamatakamatsutaka specialty). Slapsticky silliness ensues and the story turns into a holiday version of Excel Saga for a while before ending on sort of a sad note... well, a sad note before the second after-credits ending and the most excellent preview for the next episode, "The Third Christmas," what with the mecha-reindeer, 'splosions and the jack-o-lanterns in the sky. My point? I don't think I ever had one.

I'll be honest here, this is not a Christmas special to show anybody who's never seen any anime in their entire lives. They'll just stare at you like you're the unsociable little pariahcal geek that you truly are. If you DO actually have some friends who have seen any kind of humor-themed anime in the past then you just might make them chortle with Always My Santa. It's just some stupid holiday fun. Don't expect Miracle on 34th Street or It's a Wonderful Life -- expect Scrooged or Christmas Vacation and you'll at least be in the right frame of mind for this now traditional Rossman festive favorite.

If this were a normal OVA, without the Christmas theme integrated into it, then I'd probably have gone MUCH much harder on it -- but I'm a total sucker for any Santa-themed special, and anything that helps me get into the season more. Watch Always My Santa with a cup of hot cocoa and a Santa Hat for the full effect. I give this seasonal show two thumbs up just because. Merry Christmas to all, and to all a wet dream!

(as an aside, I find it extremely humorous that the Japanese can't even say "Ho, ho, ho!" properly. It usually comes out as "Hah, hah, haaaah!" or "Hao, hao hao!"

Also, I believe that the name "Santa" is said more times in this OVA than in all other literature and Christmas specials and movies combined.)

Ooooooh HELL no, homie! This shit ain't fly. Now, I don't mind them niggahs animatin' pr0n and literary classics over there in Japan, but stay the fuck away from our Christmas, you heathen mothafuckas! You don't even believe in our Lord and Savior, Jesus Christ, yet you fuck around with his birthday like it be some of yo pathetic Shinto shit that you hawk away for a few yen just to screw some idolatrous barbarian countryfolk out of some of his grocery bill. Jesus ain't yo goddamn God, and everybody with half a goddamn brain knows that Santa stays the fuck away from yo pagan island nation ever since the Rape of Nanking!

Fuck you, you commie, anti-Jesus, slant-eyed sons-of bitches! And stay the fuck away from our Christmas!!!!

CHI-CHI and His Ho-Hos

Who the fuck would name their kid "Santa?" Even in Japan? The name means the exact same thing worldwide: Fat, bearded man who travels the world on Christmas Eve giving gifts to non-Jewish and non-Muslim children. Naming a child Santa is the equivalent of giving the kid an atomic wedgie every day of his sad, sad life, with "stinky swirlies" doled out on weekends. Any parent who tries to name their kid after a famous or fictional character should be shot. I'm looking at YOU, Kevin Smith, with your "Harley Quinn", and YOU, Nicolas Cage, with you "Kal El" (Jesus, are you serious there?).

They should make it so that just when they're going to sign the papers at the hospital the nurse will say, "Are you SURE you want to officially name your child "Spider-man Johnson," Mr. and Mrs. Johnson? And if they proceed and finish the signature the doctor pops up from behind them and shoots them both in the back of the skull. Then the papers are torn up and set on fire, and then the kid is named "John Jonathan Johnson" and put up for adoption with a loving family who doesn't believe in child cruelty.

Meh, this show was alright. I liked all the cute Santa Girls, but it didn't really place me in the season. Oh well, back to watching Tera Patrick's and Kobe Tai's classic Miracle on 69th Street.